I work every Saturday so Sunday’s are MY fundays. My self care days. I cannot stress enough how important it is to set aside some time just for yourself. For me, self care generally involves a face mask, Netflix, and a baking project. My current binge: The Sinner on Netflix. I’m currently on the second season and I am hooked. But I digress, I find the entire process of coming up with a fun new recipe, making it, and photographing it incredibly soothing. I feel like these last few weeks I hit a bit of a creative rut so I haven’t been as on my game lately. But we recently got this new guy at the bakery and he has a knack for making really fun things out of the bread. This is just a small sample of a few of the things he made this past week. 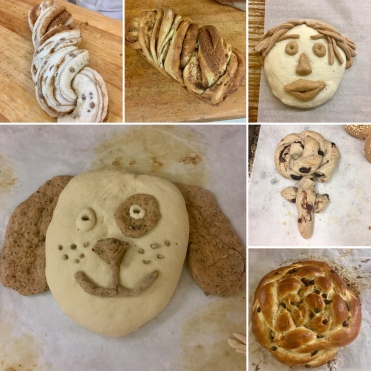 But I’ve actually found myself excited about going to work again because it’s fun to see what the new guy is going to make. And I think having him around has helped get me out of my rut because inspiration suddenly struck the other night: coffee cinnamon rolls. Two of my favorite things. So why not combine them? Originally I also had an idea for pineapple upside down cinnamon rolls which I may still explore but obviously the coffee version had to come first. Let me know in the comments if you think I should still try the pineapple upside down version.

So now the fun part – execution. Do I add coffee to the actual cinnamon Roll? The filling? The glaze? A combo of all of them? In the end I decided to add it into the cinnamon roll itself as well as the glaze. For the filling, I opted to do a chocolate filling and then to top it all off, I opted to do a banana bread cinnamon roll base for an extra fun punch of flavor.

So for the base, in addition to doing banana bread I also did my usual mix of whole wheat flour with self rising flour. I’ve tried countless recipes using all whole wheat flour and the end product is just not…great. Usually ends up too dense and I find myself just forcing myself to eat something that is subpar. Using the whole wheat/self rising flour combo gives a much nicer end product that I don’t have to force myself to eat. And these days, I sort of have the same motto as Anton Ego from the movie Ratatouille “If I don’t love it, I don’t swallow”. I don’t like to waste my time on foods that are just ok. When I eat something, it better be worth it lol

Now for the coffee, I used a coffee and cardamom latte pod from Daily Harvest. I simply prepared the latte per the directions then used that in place of the milk in the recipe for the dough. The coffee flavor in the actual cinnamon roll is more subtle which is why I also chose to do a coffee glaze over top to really bring out the coffee flavor. You could also just use regular coffee in place of the daily harvest latte and likely get the same effect.

Try daily harvest and use my code f00dventures for 3 free products with your order!

To mix things up, I thought a chocolate filling would go really well with the banana and coffee flavors so that’s what I did. Admittedly, it took 3 times to get the filling ratio right but I’m really happy with the way it turned out in the end:

Onto the coffee glaze! I used another Daily Harvest latte pod for this. Instead of making it into an actual latte, however, I microwaved the contents of the pod with a little milk for about 45 seconds. Then I combined this with some cream cheese, butter, and powdered sugar. I am obsessed with this glaze. Again, rather than using a daily harvest latte pod you could probably sub in instant coffee and get a similar end product. 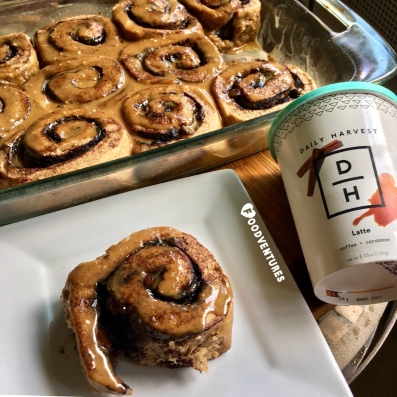 And of course I had to get an inside shot of the chocolate filling mixed with the coffee glaze. Absolute perfection.

prepare the daily harvest latte with 1 cup milk. Microwave until latte pod is melted then pour into a mixer or a large bowl along with melted butter. Stir in yeast then let sit for 10 minutes. Add sugar, salt, and mashed bananas. Stir together until combined then slowly add in the flours, 1/2 cup at a time. You will likely need more flour so just set the mixer to a low mixing speed and continue to add flour until a slightly sticky dough forms. Once a dough ball forms, let the mixer knead the dough for 3 minutes. Oil a separate bowl with the olive oil and place the dough inside. Set aside to rise for either 3 hours or overnight.

Once dough has risen, roll out to a large rectangle (about 18×12 inches). In a small bowl, combine butter with sugar and dark chocolate cocoa powder. Spread over top the dough then roll the dough into a log and slice into 12-15 cinnamon rolls. Oil a large 9×13 baking dish and arrange cinnamon rolls inside. Preheat oven to 350 degrees f then place cinnamon rolls on top of the oven, cover with a towel, and let rise until double in size. Bake for about 25-30 minutes.

Microwave the latte pod with a little milk until melted. Use a hand mixer to combine with cream cheese, butter, and sugar. Mix until glaze is smooth I.e. no lumps. Pour over cinnamon rolls and enjoy.