So per usual, I attempted to experiment in the kitchen yesterday and failed miserably. I have heard a lot of good things about spaghetti squash so I thought I would jump on the bandwagon and see what all the hype was about. I understand the concept behind it; for those looking for a lower calorie pasta option, spaghetti squash gives you a similar texture and appearance of pasta without the calories. So I gave it a go. I bought the squash, baked it, raked out the squash for the “spaghetti” and to go with it, I attempted a lower calorie, lower fat alternative to creamy alfredo sauce that was made with milk, olive oil, and cauliflower. I think my expectations were set way, way too high for this dish because it did not meet them in the slightest. The sauce actually game out pretty good for what it was. However, when I added the sauce to the squash, the sauce suddenly liquified and not only was it not visually appealing but it was just simply not tasty whatsoever. I attempted to choke it down and then asked myself why I was trying to choke down something I clearly did not like. Because it was supposed to be healthy? I remember reading a quote years ago which said something along the lines of “if you do not like something, then simply stop eating it”. The point of the quote was that you should essentially not waste your calories or time on foods that you do not like.

So after attempting to eat about 1/4 cup of this monstrosity, I fed it to my garbage disposal. Just because it was healthy did not meant I had to choke it down. I like to enjoy my food. I don’t see food simply as just fuel but as an experience that should be enjoyed. The world offers so many amazing flavors, you shouldn’t waste your time with foods that just doesn’t do it for you.

So tonight I made good old fashioned whole grain pasta. Edward originally wanted regular old spaghetti but I was saving our one and only jar of tomato sauce for a different recipe. So instead, I made a homemade peanut sauce to go with the pasta. Surprisingly, Edward even seemed excited about this dish. In the end, it was probably one of the best pasta dishes I’ve had in a long time. 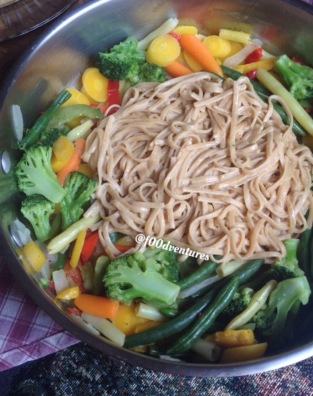 1) make your pasta according to the directions on the pasta. set aside once finished.

2) in a separate sauce pan (make sure it’s fairly large), combine your onions (green, red, white) and garlic with olive oil and saute until your onions start to turn translucent. add your ginger and chili powder and mix well.

4) add the red wine vinegar, honey/maple syrup, and peanut butter. Mix well and simmer for about 2-3 minutes. Add in your pasta and mix well. Serve and enjoy 🙂